​Every day, the BCCO provides vital direct services, education and hope
​to the 28,000+ Bhutanese and other South Asian resettled refugee populations
​in Central Ohio, ​and serves as a national model and resource.

​"AS COLUMBUS CONTINUES TO WELCOME NEW RESIDENTS TO OUR CITY AND ASSURE THE SUCCESS OF CURRENT RESIDENTS, WE NEED COMMUNITY PARTNERS SUCH AS THE BCCO TO HELP US REACH EVERY PERSON IN NEED.  BCCO HAS BEEN AN OUTSTANDING PARTNER AND WE ARE SO VERY PROUD OF OUR RELATIONSHIP."

A core goal for the BCCO centers on the great ever-present need for increased mental health services to support and stabilize our Bhutanese and South Asian refugee communities in Columbus. Several research studies conducted by the CDC, The Ohio State University College of Social Work and BCCO present a grim picture of the heavy mental illness burdens borne by Bhutanese refugees, which impacts all facets of their lives, including income stability, nutrition, self-esteem, sense of identity and contribution, community engagement and access to services, and physical health.

These recent findings have shown suicide and suicide ideation rates among Bhutanese Americans at more than double the rates of the general population in the U.S., and depression, trauma, PTSD and anxiety also at higher levels. These findings help inform the creation of critical, culturally appropriate case management, programming and outreach services at BCCO, but the increasing mental health needs in these refugee communities outstrip BCCO’s capacity and resources to fully tackle these challenges head on.

In addition, faculty from the OSU College of Social Work also led the New Americans Project, a comprehensive study of the human services landscape and issues in Central Ohio, and the key role ethnic community-based non-profit organizations like BCCO play in bridging the gaps between mainstream service providers and the large and growing New American communities in Central Ohio.   The study showed the impact of refugee service providers like BCCO, but also revealed they have "limited resources and are faced with many challenges."   Here are the key findings of the New Americans Project, and the Project's full report. 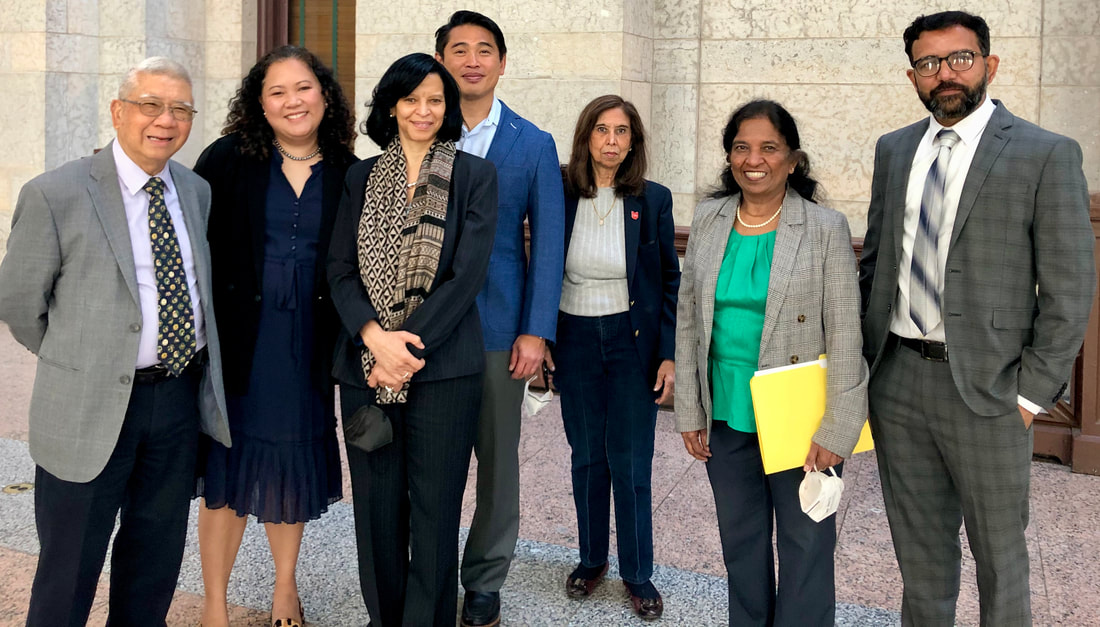 “I truly appreciate all of Sudarshan’s work on behalf of the citizens of Ohio,” said DeWine.  “His continued service and contributions to the New Americans Advisory Committee help make Ohio a better place to live, work and raise a family.”

The New Americans Advisory Committee advises the governor and state leaders about the needs of the refugee and immigrant communities, as well as their positive impact on Ohio’s economy, schools, culture and communities.

“Our state is blessed to be home to people from numerous cultures, races and ethnicities.  It’s part of what makes Ohio such a special place to live,” said DeWine.  “Thank you for the valuable contributions you and members of your community make to Ohio to enrich our state.”
​

COLUMBUS, Ohio -- The Bhutanese Community of Central Ohio (BCCO) is calling on the City of Columbus to take immediate action to combat the rising number of violent crimes and unsafe housing conditions found in neglected Northland area apartment complexes and neighborhoods.
The call to action stems from a violent home invasion, robbery and rape on January 10th of a 58-year-old recently resettled Bhutanese refugee woman living in the Commons at Victoria Village apartments in Columbus.  Caseworkers and a board member from BCCO are supporting the victim and ensuring she has access to stable housing, safety, trauma and mental health services, and legal support.   The attack follows several other violent criminal acts -- including armed robberies and a homicide -- over the past year against residents in the neighborhood, which houses many refugees and immigrants who have resettled in Northeast Columbus.
“This horrific incident with a Bhutanese refugee woman in her home has left the community and the neighborhood helpless,” said Sudarshan Pyakurel, executive director of the Bhutanese Community of Central Ohio.  “She was receiving case management services through the BCCO’s Office of Refugee Resettlement program. She had spent 26 years in the UN refugee camp in Nepal prior to being resettled in the U.S. She was also getting support from us for her mental health needs and working towards her goal of finding employment and being self-sufficient.”
“This tragic incident has not only impacted the victim, but also the community as a whole,” Pyakurel said.  “The newly resettled refugee families - and others - in the area are now very fearful and reaching out to BCCO for help and support.  Sadly, this is not the first time this has happened in the same apartment complex.  In 2020, a young man who happened to be a Bhutanese refugee was shot dead, and individuals have been robbed at gunpoint when they return home from work.  However, this unfortunate incident could have been prevented had the apartment complex acted on neglected housing conditions, safety and security recommendations and pleas the BCCO has made several times over the past few years.”
According to Uma Acharya, a Columbus social worker and a board member of the BCCO, “this type of violence has increased over time, and the leasing management company has not done anything from their end to prevent the violence. We now need all Columbus stakeholders’ attention and action to bring social changes collaboratively and hold the landlord accountable for not taking action to maintain the security and safety of their tenants.”
Several hundred families are housed in the three main buildings of the complex.  According to Pyakurel, “the main hallway doors are open and broken, anyone without a key can walk in anytime. That has welcomed ominous actors to take advantage of anyone who was vulnerable, disabled or folks returning home from work at odd late hours after working their shifts. We had requested the landlord to fix the door locks ASAP, but that sadly did not happen.”
The BCCO, which provides direct services to and represents the interests of the 27,000+ Bhutanese-Nepali American community in Central Ohio, now calls on the City of Columbus Councilmembers, Department of Public Safety and Police, Code Enforcement, Northland Neighborhood Commission, and all stakeholders who work with refugees and New Americans to join them, and take immediate action together to make these Columbus neighborhoods safe and secure for everyone, especially the most vulnerable recently resettled families.  Specifically:

1) Educate vulnerable refugees/immigrants about safety and safety in and around their Columbus residences, and how it        may be different from where they come from;

2) Work with the City, police, and resettlement agencies to ensure that the apartments in which the families are housed in meet all safety, security, environmental and city code requirements, and that violations are immediately and properly enforced;

3)  Assess neighborhood security needs and establish around-the-clock security presence in the neighborhood and at these apartments, in addition to more frequent Columbus police presence. Also, efforts to build stronger police-neighbor trust need to be taken; and

4) The BCCO requests that the City of Columbus conducts a thorough investigation of the home invasion, robbery and rape case and the perpetrator(s) be brought to justice. If the perpetrators go unpunished, these types of cases will surely rise adding to the trauma the community has been burdened with.
​
“The Bhutanese Community of Central Ohio strongly urges the City and all refugee and immigrant stakeholders in Central Ohio to help us solve this social injustice and help us create a better neighborhood for refugees and immigrants in Central Ohio,” Pyakurel said. “These resettled refugees and immigrants help build a better economy and contribute greatly to Central Ohio through employment, creation of small businesses, home buying, and supporting local industries. It’s during this tragic time which we now reach back to the mainstream community for their support.”
The Bhutanese Community of Central Ohio (BCCO) is a community-based, 501(c)(3) non-profit founded in 2012.  Every day, the BCCO provides direct services, education and hope to the newly resettled and secondary migration Bhutanese American refugee population in Central Ohio, which at more than 27,000 is the largest Bhutanese-Nepali community in the country.  Many city, county, state agencies, organizations and businesses rely on the BCCO for its culturally appropriate expertise and leadership.  The BCCO also serves as a national model and resource for other cities in Ohio and across the U.S. which serve refugee communities.

​The BCCO bravely responds to the covid-19 pandemic

The COVID-19 public health pandemic has hit low-income, minority communities with the greatest force. Perhaps no minority community is more vulnerable to the devastating effects of this deadly virus than refugees and immigrants, the majority of whom work paycheck to paycheck as laborers, struggle to navigate the health, education and social services systems even in non-pandemic times, and may not be receiving quality health care and COVID-19 prevention information due to language, literacy, and other barriers.

Given the Bhutanese Community of Central Ohio’s critical trusted role in serving this growing population, we knew we had to respond quickly and address this immediate health, social and economic emergency as it began to roar through our communities.  In March 2020, we led a major effort to create the Bhutanese Response Assistance Volunteer Effort (BRAVE) response group led by our BCCO team, which has now become the go-to resource for families in need of COVID-19 screenings and testing, educational materials, PPE and other essential supplies, food, gas cards, medicine, and economic support in Columbus and Franklin County.

​As the home base of the nation’s largest Bhutanese-Nepali refugee resettled population, the BCCO also has shared its knowledge and innovative response to the COVID-19 crisis here with other cities in Ohio and in the U.S. which serve Bhutanese refugee populations.

The BCCO's nationally recognized BRAVE COVID-19 response is making a difference and is serving hundreds of families in Columbus, Franklin County, Ohio and beyond.

The BCCO and BRAVE initiative continues to provide critical support and stability for families struggling to access quality culturally appropriate information and services on the spreading COVID-19 virus pandemic.  Some media coverage of the BCCO as it works to combat the virus:

"COVID-19 has shown me how vulnerable we are."
Letters from Home: A personal reflection.
--Sudarshan Pyakurel, BCCO
National Public Radio - WOSU Columbus
​WE NEED YOUR HELP
​
Please consider supporting the important work of the Bhutanese Community of Central Ohio and also our BRAVE COVID-19 response project by making a one-time or ongoing tax-deductible donation.  If you want to learn more about the BCCO and the BRAVE project, please click the button below. You may also use the ‘Donate’ button at the end of the page.  Dhanyavad!  (Thank you!)
DONATE VIA FACEBOOK / Learn More

"It is not about how much you do,
​but how much love you put into what you do that counts."
-Mother Teresa

​The Bhutanese Community of Central Ohio (BCCO) is a community-based non-profit organization founded in 2009. We became a 501(c)3 non-profit in 2012.  We support community members with vital, culturally appropriate social services
​  and empower them through education and advocacy.​

Your donation is tax-deductible, and most importantly, will make a real difference
in improving many lives in our community.
​
Thank you!
​
Make Our Community Stronger -- Donate Now!
Make a Donation
This section is only visible here in the editor